Hope you all had a safe and tremendous holiday. As the immigration battle heats up, someone needs to put proverbial “Boot to ass” in the fight against Democrats and or Liberals and their efforts to eliminate borders and move our Republic towards a Socialist/Globalist nation through demagoguery. It needs to end…YESTERDAY.

A new bill could mean jail time for sanctuary city leaders who help illegal immigrants avoid Immigration and Customs Enforcement (ICE), if the bill is approved by Congress.

The bill was introduced after a city mayor allowed hundreds of illegal immigrants to avoid being deported, the Washington Times reported this week.

It includes a penalty of up to five years in prison for any official who obstructs enforcement of federal laws.

Schaaf, the current mayor of the city of Oakland, California, allegedly alerted California’s Bay Area neighborhoods to an impending immigration sweep earlier this year that helped hundreds of people escape detection, according to immigration officials.

Acting ICE Director Thomas Homan said that Schaaf was essentially acting as a “gang lookout” by tipping off the lawbreakers before police were able to come through the neighborhood.

“What she did is no better than a gang lookout yelling ‘police’ when a police cruiser comes in the neighborhood, except she did it to a whole community. This is beyond the pale,” Homan said, according to Fox News.

Homan claimed 800 illegal immigrants were able to avoid ICE because of Schaaf’s warning.

King’s new bill hopes to deter other state and local officials from following in Schaaf’s footsteps.

“I want lawless, Sanctuary City politicians to hear this message clearly: If you obstruct ICE, you are going to end up in the cooler,” King said when announcing his bill.

King said there is currently some debate over whether current laws make Schaaf’s actions criminal, but he hopes his new bill will “remove all doubt.”

While King seeks to make future warnings a criminal offense, Schaaf affirms that there was nothing wrong with her actions.

In a tweet back in February following the news of her warning, she said: “I do not regret sharing this information. It is Oakland’s legal right to be a sanctuary city and we have not broken any laws. We believe our community is safer when families stay together.” 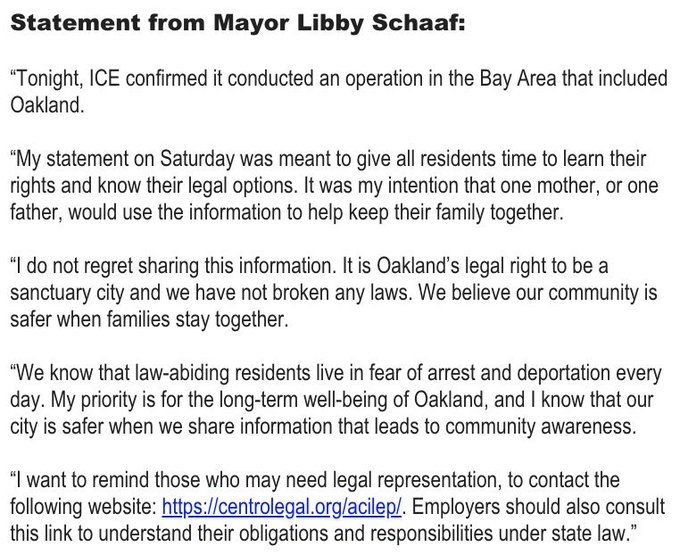 President Donald Trump also commented on Schaaf’s actions during a White House meeting of California state officials and law enforcement on the topic of sanctuary cities.

Schaaf took to Twitter to defend her actions following the President’s remarks, stating: “In Oakland, we are not obstructing justice. We are seeking it.”